Sid Meier's Colonization - One of the best games ever designed

The art of game design has never been so revolutionary

When I first heard about Colonization, I thought: ok, so this is just like Civilization, but instead of the entire world, you only have America; instead of barbarians you have the Indians tribes; instead of the whole span of the history of humankind, you have no more than 358 years. You don’t have technological advancements or scientific research, so that you won’t discover robots or jets. Why should I play it? I was very wrong.

In 1994 MicroProse released a turn-based strategy game called Sid Meier’s Colonization, a spin-off of one of the most popular strategy games ever created: Sid Meier’s Civilization. Despite the title, the game was mostly designed by the lead developer, Brian Reynolds, a talented (but almost unknown) programmer that joined MicroProse in 1991. He didn’t have much experience regarding game design, but he was the one having the idea of the spin-off. He started working on it as a spare-time project until MicroProse officially approved the plan. Sid Meier helped his protégé with suggestions, playtesting and some polishing before the game was shipped, but the main design work — and it was a fantastic work — was done by Brian Reynolds.

Colonization was a success. It never reached the popularity of Civilization (a franchise that still lives today with Civilization VI) but it sold well, it got many positive reviews (> 90%), and it’s present in many lists of Best Games of All Times. My goal today is not to review Colonization, you can find plenty of reviews out there. I just would like to tell you why, for me, this game is merely the perfect example of game-design, a masterpiece that every student or passionate about the art of creating a game — with its rules, its mechanics, and its story — should examine carefully.

When you launch Colonization for the first time, you immediately have the impression of a perfectly “themed” game. In the intro, you see an animation of a caravel traveling on a superbly hand-drawn map of the world of the 15th century. When the game menu opens, you notice that the UI uses the metaphor of wood. All dialogs seem to be made of wooden planks, the same used to build ships hulls, but also pioneer’s huts and forts. The color of the font (green) reinforces the idea of uncontaminated nature that the first settlers must have seen when they arrived.

Once you start a new game, after being named viceroy of the New World, you see the ship loading cargo at a typical European harbor (again, beautifully drawn) and then leaving for America, disappearing at the horizon.

After that, the primary user interface of the game appears, with the map on the left, and the info panel (with its wooden pattern) on the right.

The way each game starts is a brilliant choice: in Civilization, you start with a unit placed in a random location on the map. I would have expected the same on Colonization, but the designers decided it was better to begin on a ship in the middle of the sea. The waves of the sea give you a hint (in case you don’t know) that you have to travel west. In fact, the land is close, after a few tiles, you reach the dry land, and you can make landfall.

All of this contributes to creating a pleasant first experience. You haven’t started playing yet, but the theme of the game has been already instilled in your mind: you feel like a great adventurer, just arrived on the New World and ready to colonize it.

A few moves on the land and you will encounter the natives. They are friendly and most probably willing to trade with you (so no, they are not like the barbarians, in fact, they are an essential element of the game).

But you will see the main difference with Civilization when you build a city, and you enter its management screen. In the first Sid Meier game, you only have food and production, while in Colonization you have 16 types of goods. All of them can be traded, but they have different mechanics: sugar, tobacco, cotton, furs, lumber, ore, silver, must be gathered; rum, cigars, clothes, coats, tools, and muskets must be produced; trade goods can only be purchased (in Europe). Horses can be breed, so if you sell all your horses but 2, they will reproduce, brilliant!

To create the derived goods, you must have the proper raw material (for example sugar to produce rum), but you also need to give the appropriate job to one of the colonists (for instance distiller). Trained colonists (for example master distiller) are much more efficient, so it will be essential to get expert workers. Some of them can be obtained from Europe (e.g. Lumberjack, Blacksmith, Distiller, Tobacconist, Gunsmith) but other professions must be learnt from the natives (Tobacco Planter, Sugar Planter, Cotton Planter, and Fur Trapper).

It seems complicated, but it’s all very intuitive and doesn’t need many explanations (unless you think that you can manufacture cigars with cotton).

There is much more in the game of course. I could mention carpenters and production points, buildings, education, immigration, and more. But you should have already realized at this point that, unlike Civilization, Colonization is, at its heart, an economic simulation. Establishing an efficient supply network of raw materials, acquire the proper workers, create the trade routes to build the goods you need and sell them, is a critical element of the game. In a way, Colonization is more similar to The Settlers II then Civilization. But unlike The Settlers, you have to build your business exploring a new world, discovering treasures and natural wonders, negotiating lands or goods with the natives, fight against the other European countries, and more.

Once you understand all of this, it is so rewarding to play that, at least at the beginning, you almost forget that the goal of the game is not to build a profitable economy, the goal is to obtain Independence.

Colonization tells you that your game will start in 1492 and that you will have to obtain Independence before 1850. So all the things you do, including building your commerce network, have a deadline. The risk with this kind of games is that if you are enjoying playing, you might not want to change the situation. Why should I declare Independence and start a war when I prefer to manage my colonies and see them grow?

Actually, Colonization does not have this risk. Reynolds designed the game so well that Europe appears useful and helping at the beginning, but you progressively see how cumbersome it is and eventually, you hate it so much that you can’t wait to declare Independence. Every time the king tells you that he is raising the taxes and he asks you to kiss the royal ring, your anger grows. So when you finally start the war against the King’s forces, this is something you wanted.

When you declare Independence, you start the final phase. It’s like a different game, you have to defend your territories and defeat the king’s forces, but for all those turns you prepared for this. It was your purpose.

Interestingly enough, the game doesn’t need to show a text with some historical references, to tell you the reasons why the colonies declared Independence. The game makes you feel what they (most probably) felt. A history lesson delivered through game mechanics. Brilliant.

Since Colonization is so good in placing you in this historical context, when you finally win, and you obtain Independence, it’s hugely gratifying. Other economic simulations such as the Anno series have excellent game mechanics, but you don’t have the same motivation to win the game. In Colonization, when you win, it’s a memorable experience.

Some criticized Colonization for being racist for the way the game treats native people. You can kill Indians, and you can attack and pillage their villages. What’s even worse, they are not strong enough to defend themselves and send you back to Europe.

For sure there are plenty of other games that allow you to kill other human beings. Still, it’s true that you feel guilty when you destroy a native village in Colonization. But this is precisely why I would not see problems if my son plays this game. When I attack cities in Age of Empires, I don’t feel guilty, but Colonization can make you feel bad.

When I play, I like to be friendly with natives, and the game rewards you for doing this: trading with them is very profitable, they send you gifts, and you can send your colonists to their villages to learn a profession. But it’s possible that at some point you absolutely need that prairie, you don’t have money to pay for it, you know that if you take it, the friendship will be over and soon you will have to fight. Despite this, you decide to occupy the tile. At that point, you realize that somebody must have been in the same situation a long time ago and that native Americans, in the end, had good reasons to be angry. Another small history lesson.

I don’t think this is enough to earn the label of “educational game,” but it adds depth and it contributes to making Colonization one of the best games ever created.

I already spoke about the graphics but I still haven’t mentioned one of my favorite elements of this game: the music. The 12 pieces, plus the three tunes, composed (I assume from the credits) by Jeffery Briggs, contribute in an exceptional way to the creation of the experience. It’s music that you would never want to switch off.

One of the reasons why I don’t like the 2008 remake it’s because you can’t listen to the original music while you are playing. Without that, it just doesn’t give you the same feeling.

What else can I say, if you have reached this point, it means you already know what to do. Just play, start the revolution, and have fun! 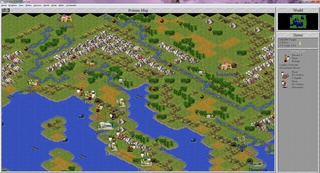 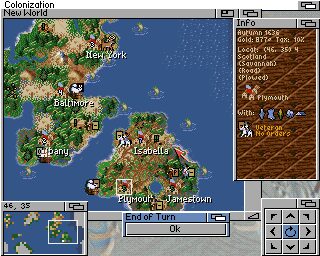