The fascinating story of Santa Paravia and Fiumaccio

Did you know there is an old game with a strange Italian title, Santa Paravia en Fiumaccio, set during the Italian Renaissance (1400)? I didn't, but I discovered that it's an intriguing title, with a captivating story worth telling.

The story of Santa Paravia starts in 1978, one year after the birth of the home computer Trinity: Commodore PET, TRS-80, and Apple II. If you don't know what I'm talking about, have a look at this article. These 8-bit computers were programmable, in a language called BASIC. For the joy of the hobbyists, some magazines publishing source codes of programs started appearing soon after. One of them was SoftSide, an American magazine launched in October 1978 and dedicated to the TRS-80.

The cover of the December 1978 issue of SoftSide, was showing a game written by George Blank, whose title was Santa Paravia en Fiumaccio. Blank, now a professor at the New Jersey Institute of Technology, was passionate about Italian History. He wrote the game, and he described it in a long article, attaching the full source code. The program, written in the TRS-80 BASIC, was carefully explained and ready to be copied.

Santa Paravia is a resource management game, a mix between a business sim, a city-building sim, and a "god" game. The starting year is always 1400. You are the ruler of a city-state in the fragmented 15th century Italy. Your goal is to manage your city, make it grow, enlarge your territories, and receive higher titles. If you do well, you can become Count, then Marquis and Duke. Up to six players can challenge themselves in "hot seat" mode. The first to become King (or Queen) wins.

To be honest, Blank took inspiration from an even older game called Hamurabi, a precursor of modern resource management sims. This text-only game was developed in 1968 in a programming language called FOCAL, for the DEC PDP-8 "minicomputer" (a sort of smaller mainframe). Blank took one of the basic mechanics from Hamurabi: the management of the grain supplies. In this game, you must decide, at every turn, how much food you want to sell and how much of it you want to distribute to feed the people. If you are generous, more serfs will arrive, but don't forget you need to be prepared in case of shortages, and you also need to make money to buy new lands. But Santa Paravia offers more than this: you need to pay soldiers to defend your territory, and you need to manage the level of taxation. You can also purchase structures such as markets and mills. You can also build prestigious palaces and cathedrals. It was a pretty advanced game, considering that it was developed 40 years ago.

One year later, in 1979, Instant Software started selling cassette versions of Santa Paravia and Fiumaccio, porting it also to Commodore PET, Apple II, and Texas TI-99/4A. The Apple II version was particularly successful, and apparently, there are still people playing it today. Years later, Jeff and H.Z. Hurlburt created an updated and improved release for the Apple II. The latest changes were made in 2003, twenty-five years after the original game. If you still have an Apple II (or an emulator), you can go and download the game here.

Ten years after the original release, Keypunch Software and StarSoft ported Santa Paravia to the Commodore 64, Atari ST, MS-DOS, and Amiga. These 1988 versions feature a vastly improved graphics compared to the original game, though, to be honest, the quality of the illustrations was not state-of-the-art. Especially on the 16-bit platforms, they could have done so much better. Despite this, the Amiga version is very precious because original copies of this game are scarce. An Atari ST version is currently for sale on eBay, but the Amiga one is impossible to find. It's also not very easy to play on emulators since it requires Kickstart 1.2, and it has never been ported to HD/WHD. You can play the floppy version, packed by GamesNostalgia, here.

Keypunch's releases were the latest official ones, but thanks to the availability of the source code, many programmers tried to create their version of Santa Paravia and Fiumaccio. They were unofficial/amatorial remakes, so most of them can't be found anymore. It's also quite challenging to get news about them; it's a job for a software archaeologist. Anyway, keep reading to know what I have discovered.

On the 21st of December, 1998, Jeffrey Henning posted a message on the newsgroup comp.sys.ibm.pc.games.strategic announcing that he had just released his Windows port of Santa Paravia, based on the TRS-80 version. The first one to answer was Brian Reynolds, designer of Colonization and Alpha Centauri, wow! He was playing Santa Paravia when he was 13, on the Apple II. Henning's website is not live anymore but I was able to find his Visual Basic code here.

In 2003, Thomas Knox rewrote the game entirely in C language and posted the source code on planetsourcecode. This site does not exist anymore, but Knox's code can be found on github. It's possible that his work helped other programmers creating new versions.

I found a VB.net conversion made in 2004, and in 2006 a web-based version of Santa Paravia, written in ASP.NET and C# by Charlton MonCrief, could be played online (sadly not anymore). From the screenshots, it didn't look amazing, but still. Another web-based version was created by Jason Foster and was kept updated until 2012. The website (paraviaonline.com) is still alive, but registration doesn't work, so I can't tell if it's working or not.

But the real mystery is a Java version of Santa Paravia created in 2015 by Manuel Afonso Neto. From the screenshots, it seems a fantastic remake, and I really would like to try this one. It doesn't seem to be an amatorial version, so I wonder who produced this game. Unfortunately, the download link doesn't work, and I could not find this version anywhere. I tried writing to Manuel, but no answer yet.

Finally, if you are a developer, you should know that, in 2017, a programmer called "darkf", has released on Github a new version of the C source code of Santa Paravia e Fiumaccio. It's mostly an updated version of the C code by Thomas Knox. Now, we hope this could be the starting point for a new remake.

If you don't like C, or if you are merely curious, I leave you with the original BASIC code for the TRS-80, that can be downloaded here. Good luck! 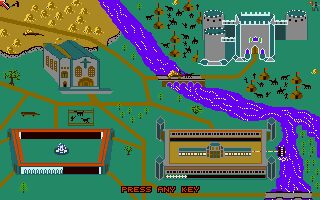 neo_viral - 8 July 2018, 5:03 pm
The 2015 version ive managed to download using the internet archive`s wayback machine,and installing java 8 it runs fine,if you still want this version.Of course it is all in Portuguese it seems and it is an exe file so i would have no idea where to start to even begin translation.Perhaps Mr Neto can assist if you can get into contact with him. :)

Taciano Dreckmann Perez - 21 July 2022, 5:54 pm
Thanks for the educative article. I have coded a web version of the game in JavaScript. It can be be found at https://taciano-perez.github.io/santa-paravia-web/