1000 Miglia is a driving/racing game that was developed and published by Simulmondo in 1991. 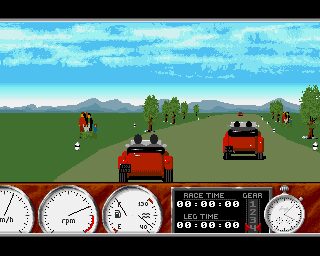 1000 Miglia is a driving/racing game that was developed and published by Simulmondo in 1991. The game was released for the Amiga, Commodore 64 and MS-DOS.

The game has a significant historical approach as it reproduces the early years of the Mille Miglia race that took place in Italy. As a player, you can choose the edition you want to take part in, from the years 1927 to 1933. You will visit Italian cities such as Rome, Brescia and Ferrara.

The beginning of the race is the big-brain segment where you are needed to make crucial selections to start the race. The game allows the player to choose the car, a driver, and a secondary driver; each of them, have different capabilities/skillset. 1000 Miglia allows the player to customize their gameplay with historic cars and riders that actually took part in those early years of racing, along with the ability to create new ones setting the driving skills, endurance, prowess as a mechanic and even their own favorite stop.

As I tested out the waters with the game racing through snowy fields and bright sunny country roads across the country, I got to experience some of the key areas of the game. Firstly the game is not hard; it has a pretty simple control system that is, however, quite buggy. Players can use the keyboard to maneuver the car around while fiddling with the intricate manual 4-gear system involved. The difficulty arises when the car breaks down randomly, this requires changing of parts. The pieces that you are carrying have to be pre-selected before the race, and if you fail to pick the correct ones out, you might as well abandon the race. The spare part mechanism does add a certain amount of realism to the game, but pretty soon, it gets annoying, as the car will seemingly breakdown at the most random moments, costing you a lot of time.

The game's graphics are pretty top-notch, and the atmosphere varies through the game's weather system. The surroundings are pretty well detailed, along with subtle changes to signify weather patterns. Racing from fast lowland traits to the Apennine's, through the night, day, fog, and rain, does bring out fresh air to the game.

From dodging cars, people, and trees, the game has a different way of keeping the player's eyes glued on to the screen. The lack of sound is a bummer, but the impressive visuals do somewhat make up for it. Honestly, I would say the game is a 50/50 for players, it has the potential to make you completely love it or to make you completely hate it.