Action Soccer was created by Ludimedia SAS, a Ubisoft subsidiary, and released in 1995 for the MS-DOS platform. 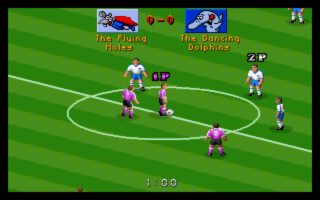 Action Soccer was created by Ludimedia SAS, a Ubisoft subsidiary, and released in 1995 for the MS-DOS platform. It was mostly focused on bringing an arcade version of soccer/football with a very distinctive perspective.

Ubisoft is a game company that has always tried to innovate and develop unique, exciting game ideas. Action Soccer is definitely one of those titles that will impress you with the great gameplay and immersive football mechanics. They did try to make something different here, as the game is not a simulation. Instead, it’s a more arcade version of football with a 2D overview and 3D isometric gameplay.

While some series were more about simulation, the idea here was to bring new technologies to the table. But they still brought a lot of depth to the gameplay, making it fun and offering a lot of replay value. It’s similar to the Sensible World of Soccer, but it lacks some of that series's ideas. It’s still a perfect and immersive title with a lot to offer.

The idea in Action Soccer was rather simple, you had 16 different sports teams, and you had to choose one of them to enter a tournament and eventually win. While every team had stats like shot power, strength, and speed, there were no things like fatigue, offside, or tactics. The arcade gameplay made it very interesting for people that just wanted to pop in and have a good time with other players or against the AI.

You were able to play a friendly game, a tournament, championship, or even try out your skills to win the Ubi Cup. The game also allowed you to change the weather. It was also possible to choose if your team was more defensive, offensive, or normal.

Action Soccer was not a game that focused on innovation. Instead, their strength game from creating a more arcade version of serious football games. They did have humorous arcade commentary. And the visuals themselves were very colorful. It was a fun style that managed to make the game interesting, and you could also play this on split-screen, which made for some interesting situations.

There were better games in the genre, but Action Soccer still manages to stand out with its humor and interesting mechanics. It does have a straightforward gameplay loop, and overall you will find it intense and rewarding to go through. Plus, the fact that it has multiple game modes and changing the weather condition helps you bring in some replay value.

If you love football and you want a more barebones, arcade version of the game, Action Soccer will be great for you. You can pick it up and play, and you will find every game to be intense yet a lot of fun. There are some customization options to make every session different, which is more than welcome. Action Soccer might be a bit slim as a package, but more than makes up for it with unique character and funny moments!