The Adventures of Willy Beamish

The Adventures of Willy Beamish is a graphic adventure developed by Dynamix and published by Sierra On-Line in 1991. 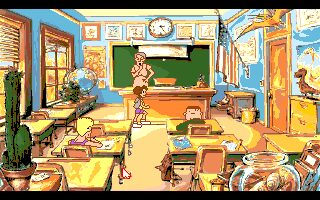 The Adventures of Willy Beamish is a graphic adventure developed by Dynamix and published by Sierra On-Line in 1991.

The game is regarded as one of the best Sierra adventures, and with good reason. This golden oldie allows the player to go back into their glory days of being a nine-year-old mischievous boy. It uses hand-drawn cartoon themes and characters.

The game is set in the school years of Willy Beamish, who is taking on the role of a classic ''brat'' from an upper-middle-class American family. Willy is a typical kid, obsessed with science fiction, hanging out with friends in the treehouse, and the usual stuff. The plot is simple: the Town of Frumpton is under threat from a range of baddies, and it is up to Willy to save the day and become the hero. The game follows through with many twists and turns that are quite common with Sierra On-Line games. There are many hidden secrets for the player to enjoy.

The game controls are pretty easy since they are entirely point-and-click based. The player can use the mouse to click on people, objects or exits, to interact with them. It is straightforward, and this simplicity is one of the major plus points in the game.

The VGA graphics are excellent: the whole world is clearly depictable, vividly illustrated through a 256 color palette, which is nothing short of outstanding for a game of this age. The PC game had notably bad sound effects compared to its Sega CD version, but I have to admit they were good enough for 1991.

The game is super fun to play and has an incredibly creative game design; even the loading screen has a small minigame to keep you company! This is undoubtedly a title that you should try, and it will provide you with hours and hours of entertainment.

Don't forget to check the new GOG version (link on the top right).

The Adventures of Willy Beamish

This is an amazing game especially for its time, but it even holds strong till today.

PLEASE FIX THE RATING OF THIS GAME as 68 is no fitting it!