Ascendancy is a sci fi turn-based strategy game developed and published by The Logic Factory in 1995 and released for DOS. 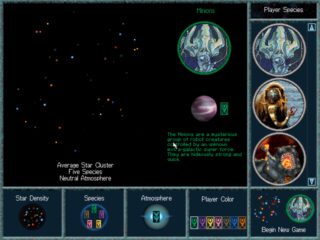 Ascendancy is a sci fi turn-based strategy game developed and published by The Logic Factory in 1995 and released for DOS.

It is referred to as a “4x” game, meaning explore, expand, exploit, and exterminate (if you ignore the e’s that is). Though similar to other games (Master of Orion being the most mentioned), it manages to set itself apart with unique gameplay elements. Earning a Codie for Best Strategy Software in 1996.

The storyline is thin allowing the player to create their own. Once your choose your alien race, each with their own strengths and weaknesses, you start out with one lone planet. You build and colonize on the planet, of course, but you can also advance your research to build space ships and explore the stars. Research is governed by the ‘research tree’ that keeps track of discovered technologies. On your quest through the stars you encounter many other alien races with their own agenda for their species. Some are peaceful and may ally themselves with you while others will attack on sight. There are some uninhabited planets that can be taken peacefully while others you may have to strike deals with or exterminate the inhabitants. You must also manage your space colonies and produce energy to power your ships to keep your influence expanding. The map is seen as a 3D rotatable model of the current star cluster. You can see the ‘star lanes’ (paths your ships follow), colonies, and solar systems contained within it. Each star cluster has a different density that determines how many planets are available for colonization. You choose your star density at the start of the game and it will determine the length of your play time. More planets = longer play and so on.

Many factors of the game are random including the encountered alien races, planet topographies, and the types of stars contained in a system. This randomization makes every playthrough unique. This game is fun and addictive and will keep you exploring the galaxy for hours.