Master of Orion is a 4X science fiction turn-based strategy game developed by SimTex and published by MicroProse in 1993 for Dos and Mac. 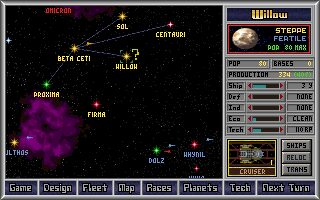 Master of Orion is a 4X science fiction turn-based strategy game developed by SimTex and published by MicroProse in 1993 for Dos and Mac.

This title pretty much invented 4X (explore, expand, exploit, exterminate) as a genre. It is the refined version of a prototype game created by SimTex, but never released to the public, called Star Lords. It is said to be the inspiration for later games like Ascendancy.

Taking place in space, you have your choice of 10 playable alien races, each with their own special advantage. You choose your difficulty, size of your galaxy, and number of enemies, but the map is randomly generated at the start of the game. Beginning on your homeworld, you must spread your influence through either diplomacy or conquest in order to get a chance to go to planet Orion, the throne-world of the Ancients. Orion is protected by a warship that you must either become strong enough to destroy or impress with your diplomatic skills. You can also colonize the galaxy with a combination of the two approaches. The size of a colonized planet determines just how useful it can be. On each colony you decide what the focus will be among choices like ship building, factories, research, etc. Research and the technology it yields is your best asset when expanding your empire. Use a technology tree to determine what research will be funded. Combat with a planet occurs from the planet’s orbit and can be controlled manually or set to auto.

Master of Orion is galactic conquest at its best. It takes away the formula and micromanagement and gives you flexibility and variety. The different races, different strategies, and randomized maps keeps it from getting stale. Each playthrough is a different story you can tailor to your liking. Winning more than a dozen awards following its release, Master of Orion is a true classic. This game will suck you in and keep you playing.

Get the full game on GOG