Bandit Kings of Ancient China is a wargame/strategy game created by Koei, released in Japan in 1988 for MSX2, and then ported to the US/European markets in 1990. 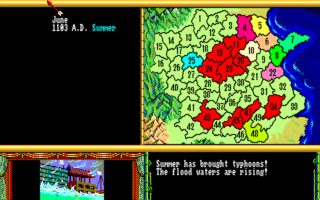 Bandit Kings of Ancient China is a wargame/strategy game created by Koei, released in Japan in 1988 for MSX2, and then ported to the US/European markets in 1990. It was released for MS-DOS, Amiga, and Macintosh.

Are you a fan of extremely complex strategy games? When I mean complex, I mean super-complex; if so, then this is definitely the game for you. Bandit Kings (original title "Suikoden: Tenmei no Chikai") is a turn-based strategy game that has so much depth that it has a manual comprising of a hundred pages! Koei was pretty experienced in the genre, having released two installments for the Romance of the Three Kingdoms series before Bandit Kings of Ancient China.

The game is set in the 12th century, where it brings to life a pretty awesome Chinese folk legend where 108 heroes who were exiled, take up arms in an attempt to overthrow the tyrannical Gao Qiu and restore the kingdom. It's not a fairytale cooked up by a random person, but a well-respected legend that inspired the hearts of many, including the guerillas of Mao Tse Tung, who is the founding father of the People's Republic of China! How badass is that?

Bandit Kings of Ancient China is pretty similar to most of the other wargames released by Koei. The player controls a specific leader and the story plots around the character as you consider your options during the different seasons: diplomatic negotiation, military escalation, war-economic buildup, and internal politics; Basically, one must unite the Empire during the Song Dynasty. The game follows a historical approach with a hint of fantasy included as magic becomes an indispensable factor in a victory.

The game progresses at a pretty manageable pace. One to seven players can play the Bandits of Ancient China simultaneously, each with different scenarios, packed with a cast of a whopping 255 characters. The game allows each player to take a month of in-game playtime per turn, where they must build up power and popularity. Once they reach a "popularity" of 250, the Emperor will allow you to declare war on the evil minister and bring him to justice.

Bandits of Ancient China does feature some of the most detailed graphics for a strategic wargame of its time. The colorful maps and menus (the game is heavily menu-driven) and the impressive animated sequences make the game much more interesting, who doesn't want to see an epic beheading even if it's yours. There isn't any in-game music, which is both acceptable and a bit disappointing at the same time, as there is nothing to keep you company during those long battles, but likewise, there is nothing to distract you from focusing as well.

The game is much more difficult when compared to the rest of Koei's releases, such as Romance of the Three Kingdoms. The computer AI is no joke and will pummel you endlessly if you aren't careful; with the time limit of 27 years counting down, it's a race to see who is better at managing their forces, you or Gao Qiu.

The game is definitely worth one's time, and even though it has a pretty hefty manual, one can easily catch onto the basics and progress through a bit of effort. The game keeps up to Koei's high standards, and I'd give it an 8 out 10.