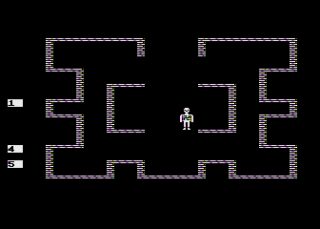 Your mission is to infiltrate a Nazi bunker to plant a bomb outside the door of Hitler's office and escape before the bomb explodes. The graphics, very rudimentary, is definitely not the best aspect of this game, but the gameplay is great. You will have to stay hidden and avoid shooting as much as possible because, if the guards activate the alarm, you will probably get caught. The dagger is the best choice if killing is necessary. Each level has a passcode that you can obtain bribing the guards if you have enough money.

Thanks to the Beyond Castle Wolfenstein Project we are now able to play the original PC Booter game on DOSBox, with speed adjusted and other minor fixes.