Bioforge is an action adventure game set in a dark sci-fi atmosphere. 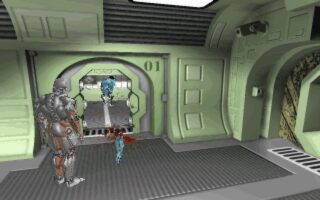 Bioforge is an action adventure game set in a dark sci-fi atmosphere. Published and developed by Origin Systems, under the direction of Ken Demarest, the game set itself apart from other similar games on the market. Utilizing newly developed technology to create and design three-dimensional characters with detailed realism, it feels more like a movie than a game. Bioforge was originally released for DOS in 1995.

Bioforge is set in the far future where fanatical extremists are bent on galactic conquest. You wake to find yourself imprisoned with no memory of who you are. The victim of monstrous experiments, you must fight your way through organic and robotic enemies to find answers. You can choose between guns or melee weapons to forge your own path. Play your way through both indoor and outdoor environments to uncover the truth. Collect items, solve puzzles, and discover the secrets of the complex, if you dare.

Bioforge uses polygonal characters over pre-rendered backgrounds to set the stage for an immersive experience. This was the same technique used on Alone in the Dark. Featuring compelling, realistic characters and a complex, dramatic storyline, Bioforge is a force to be reckoned with.

The game didn't sell so well, but it won several awards. It was voted Best Action-Adventure in 1995 and it is considered by many one of the most Important PC games of the 90's.

If you have never played this one, you definitely need to.