Tomb Raider is an action-adventure game developed by Core Design and published by Eidos Interactive in 1996 for PC, Sega Saturn, and PlayStation. 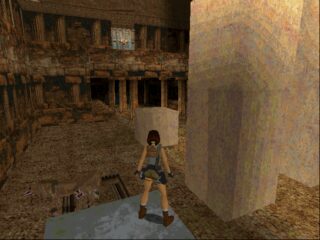 Tomb Raider is an action-adventure game developed by Core Design and published by Eidos Interactive in 1996 for PC, Sega Saturn, and PlayStation.

Eidos Interactive, formerly known as Square Enix Europe, was responsible for famous sagas that left their mark on the world of video games. Although the company can be remembered by huge franchises like Soul Reaver or Hitman, it is clear that its most significant legacy is the legendary Tomb Raider. The title not only served to entertain players with a great action-adventure but also to establish an empowering female role model at the time. With 19 entries scattered across several consoles, it all started in 1996, with the first Tomb Raider.

The game is centered on Lara Croft, an English archaeologist, who searches for hidden treasures throughout the world. In a very similar way to Indiana Jones, the heroine explores the most dangerous places in the world, such as unstable mountains or ancient temples full of traps. In this particular installment, the protagonist is hired to search for a strange artifact in a hidden tomb in Peru. But as the story unfolds, it is soon revealed that it is a much more complicated mission than Lara thought. This is because she quickly begins to unravel mysteries, betrayals, and starts a new and long quest.

Even though the heroine must use weapons to combat various wild animals and enemies that attack her, the game is not combat-oriented. Instead, the title is focused on critical thinking, coordinated jumps, and puzzle-solving. So, unlike many contemporary titles, the emphasis of Tomb Raider is not on interaction with enemies, but with the environment in general. All this contributes to feeling at all times the essence of a classic platformer.

Each level has a series of secrets. Some can be simple to find, but others can be easily ignored if attention is not paid at all times. Secrets are optional and give players items such as weapons or ammunition. This is vitally important for the duration of the game because many users want to finish it 100%.

Knowing the platformer direction that the developers took, one can expect the graphics to play an essential role in the overall adventure. First of all, the heroine is built with polygonal elements and 3D modeling. In this third-person adventure, brown and grey colors usually predominate. This is due to the environment full of ruins and caves through which Lara Croft must advance, but even when she leaves these environments, the colors remain in one way or another. When there are other colors, this same effect is achieved by making them more opaque, so they melt and are transformed into derivatives of gray.

The music is executed in a very particular way: Tomb Raider does not use music at all times. This makes it focus more on other aspects, such as sound effects. When the music really appears, it generates a more intense impact due to its absence in the previous sections. This was composed by Nathan McCree, who chose tones that rotate between mystery and action, very faithful to the essence of the game.

The title was a huge commercial success. The use of combat only occasionally to increase the tension of the game and the exceptional graphics were among the highest points. Today, it is considered a cult classic and a title that has aged well.

With a great story, innovative mechanics, superb graphics, and fantastic character design, Tomb Raider is a legendary title and a masterpiece that will stand the test of time.

If you want to understand where this great franchise came from, this is your chance to put on the Lara Croft boots and do it. It's easy to be sure that this will make you want to play the whole saga.