Blade is a fantasy turn-based tactical RPG created by Scorpius Software and released in 1997 for Amiga, including AGA and CD models. 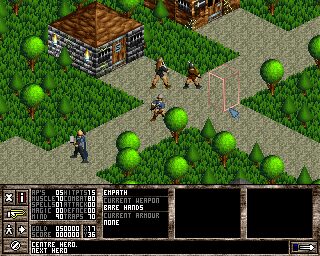 Blade is a fantasy turn-based tactical RPG created by Scorpius Software and released in 1997 for Amiga, including AGA and CD models.

The game designed by Mark Sheeky is not a classic RPG. You don't create your characters, but you can choose between the 8 predefined classes and races. Combat is turn-based, and every character has a limited amount of action points available. Once all points are consumed, the enemies move. Because of this, and the isometric point of view, many have defined the game as a sort of UFO: Enemy Unknown and X-COM: Terror from the Deep with fantasy settings. There is also an interesting game economy, with money that can be deposited in the banks and used later to buy items and weapons. The AGA chipset and increased memory are used well, with 256 color graphics plus speech and additional effects.

Unfortunately, like many Amiga games released in the second half of the '90s, the title didn't get much attention and was soon forgotten. It's possible that hardcore Amiga fans didn't notice it either, so we are now delighted to offer you this little gem. If you like the idea of a medieval X-COM, you will love this game.