Commandos: Behind Enemy Lines is the first chapter of a famous tactical game series created by the Spanish studio Pyro and published by Eidos. 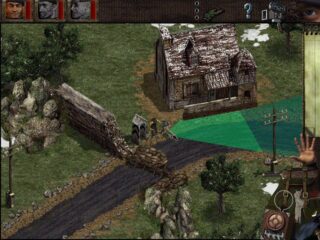 Commandos: Behind Enemy Lines is the first chapter of a famous tactical game series created by the Spanish studio Pyro and published by Eidos.

This first game, designed by Gonzalo Suárez and Ignacio Pérez Dolset, was released in 1998 for Windows only.

It is set during World War 2, and it includes scenarios in North Africa and Europe, with missions that vary from assassinations, sabotage, or rescuing other soldiers. At first sight, Commandos might seem like a classic real-time strategy game, but you soon discover that it's more a puzzle-tactical game, with mechanics heavily based on stealth. There are six men at your disposal, each with his own skills: the sniper, the killer, the diver, the demolitions expert, the spy, and the driver. Not all of them are available in every mission, only the ones that you need - if you want, like Lemmings. Using them properly and possibly without raising the alarm, will be fundamental.

The game was a huge success, with more than 1 mln copies sold, and it's considered one of the best games made in Spain.

A remastered version was released in 2019 on Steam and GOG.