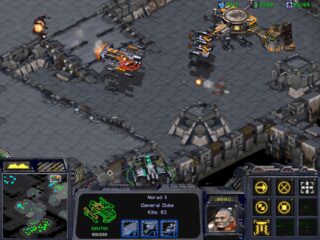 It was developed by Blizzard Entertainment, and it was initially released in 1998 for Windows. Later it was also ported to Mac OS and Nintendo 64. The game design was curated by Chris Metzen and James Phinney.

The game features three distinct races, Protoss, Zerg, and Terrans, utterly different in terms of visuals, weapons, and buildings. If you follow the single-player campaign, the storyline will allow the player to control all of them. You will have to learn and master their strengths and weaknesses if you want to win. Starcraft was the first RTS to use totally different factions. But despite the differences in terms of tactics and strategies required by each faction, the game is perfectly balanced. This one of the reasons why Starcraft is so great. A fantastic sci-fi graphics, brilliant music, hi-quality dialogs, and a storyline that was continued in books and novels, complete the game.

There is not much more to say, mainly because it's very probable that you have already played this legendary title.

In 2017, Blizzard released Starcraft Remastered, with improved graphics, music, and support for all screen resolutions. At the same time, they released the original StarCraft and StarCraft: Brood War for free. To play, you will need a Battle.net account.