Dangerous Dave’s Risky Rescue is the third of the Dangerous Dave series and was developed by Gamer’s Edge and published by Softdisk in 1993 for DOS. 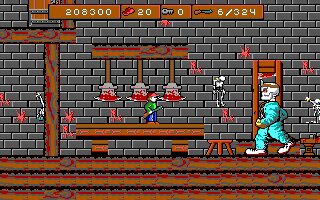 Dangerous Dave’s Risky Rescue is the third of the Dangerous Dave series and was developed by Gamer’s Edge and published by Softdisk in 1993 for DOS. This was only the second one in the series to be side-scrolling, so it was marketed as ‘Episode 2’ after Dangerous Dave in the Haunted Mansion. Risky Rescue was followed by Dave Goes Nutz, the 4th game, but Episode 3 of the side-scrollers.

Dave is once again off to rescue his brother Delbert from the clutches of evil. Delbert must be real pretty to get kidnapped so much, just saying. Anyway, Dave is back with his backwoods gameplay including collecting rabbit’s feet, JD, and ice tea, among other things, to score points. As well as toting around his trusty shotgun to take out various enemies. Careful where you stand when you shoot as that shotgun packs quite a wallop. The levels take place mostly outdoors, which is a change from Haunted Mansion. As a platformer at heart, Dave will also do his fair share of hopping to reach things and avoid danger. Thankfully, they kept Dave’s gore intact, especially in his death animations which are almost worth dying to watch. Dangerous Dave fans will have a blast with this one, though I think it’s a fun series for anyone who doesn’t mind gore.