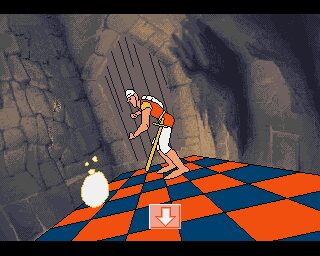 The original arcade was too big to fit into the memory of the computers available at that time, not to mention the floppy disks. So the story was split into two parts. The Dragon's Lair game, released in 1989, ends when Dirk defeats the dragon. In this second part, released several months later, Dirk has to save the princess from the castle.

Technically speaking, Escape from Singe's Castle is far more advanced compared to the predecessor. It's faster, smoother, and hard-disk installable. It also offers a useful feature that can be activated to help the players identifying the next move: a small icon on the bottom of the screen will tell you what to do if you want to continue playing. Actually, I should say "watching" because Dragon's Lair is not really a game: it's a movie, and you have to perform the right move at the right time to continue watching. In this, the gameplay is really faithful to the arcade version. Beautiful and annoying at the same time. But it's also one of the most beautiful things you can see running on the Amiga. At the time, it was revolutionary, and it was simply stunning. Maybe, more rewarding for the friend sitting next to the player rather than the player himself.

Even if it won't be remembered as the best game ever created, it's a milestone, and it's worth playing it again.