Empire Deluxe is a turn-based strategy game released by New World Computing in 1993 for PC. 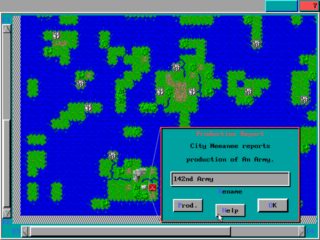 Empire Deluxe is a turn-based strategy game released by New World Computing in 1993 for PC.

The story of this game begins in 1977 when a first version of the game (without graphics, of course) was created by Walter Bright. The American programmer, also known for having invented the D programming language, took inspiration from Risk and several war movies. The basic mechanics are not much different from Sid Meier's Civilization. The key elements are the cities that won't be built by the players but are already spread in all the maps, ready to be conquered.

Each player starts in a town, and building his armies, he will have to conquer other cities to become more powerful and eventually conquer all the world. Choosing what to produce is fundamental because each unit will take several turns to be ready - but you already know that.

The original game was rewritten several times after 1977, and a version was released in 1984 for MS-DOS. The success led to a new version, published in 1987, called Empire: Wargame of the Century. It was released for the Amiga, MS-DOS, Atari ST, Commodore 64, and more. Finally, in 1993, New World Computing created a new version, the one you are going to play: Empire Deluxe. Apart from some improved graphics, the game features larger maps and new units. If you are a fan of turn-based strategy games, you cannot miss this one.

And if you liked it, have a look at Empire Deluxe Combined Edition on Steam. It includes the Deluxe and Enhanced versions, plus scenario editor and much more.