F-19 Stealth Fighter is a combat jet simulator; it was developed and released by MicroProse in 1988 for PC DOS and in 1990 for the Amiga and Atari. 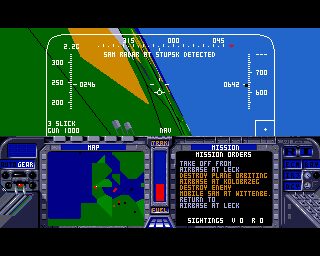 F-19 Stealth Fighter is a combat jet simulator; it was developed and released by MicroProse in 1988 for PC DOS and in 1990 for the Amiga and Atari.

The game is a remake of the 8-bit title called Project Stealth Fighter. The new version is not only different because it is a 16-bit title, but also has the direction of the renowned Sid Meier. The Canadian game designer, one of the two founders of MicroProse, was not new to military sims. In fact, he had previously created F-15 Strike Eagle and Silent Service, the submarine simulator that catapulted this type of game to fame.

As anticipated in the name of the installment, the player must pilot an F-19 Spectrum, a hypothetical plane. MicroProse took inspiration from some rumors about a stealth fighter that the U.S. Air Force was going to release. Then, in November 1988, the U.S. Air Force finally released the real plane, the F-117, and MicroProse fixed the game to include both the real aircraft and the fictional one.

Like its predecessors, the game features real-world combat strategies and a variety of weapons at its disposal. The player can choose between different war conditions, like a cold war option in which one must avoid being discovered at all costs. Also, the battle site is extensive: you can visit several geographical locations that change according to the mission.

The developers also designed several unique characteristics, such as a radar system with its own behavior according to the situation and even an ending intended for each specific operation. Besides, gamers are now rewarded with a medal and achievement system, which recognizes their efforts and motivates them to keep playing.

What sets this game apart from its contemporary airplane simulators, such as Interceptor, is its strong focus on strategy. While the other releases were mostly based on the combat parts of the missions, F-19 was thought of as a game in which an extra bit of patience and intelligence must be implemented. To achieve this goal, developers worked with even more stealth tools and enemies with an AI adaptable to the strategy adopted.

True to the style of its gameplay, the essence of F-19 is not in realistic graphics or distracting music as all this merges into the gameplay. In this case, the makers decided to take out the music and leave only sound effects. Furthermore, the background goes to a second plane in order to give more emphasis to the strategy menus. Although these creative decisions lose points of appeal, they gain them in immersion.

The game received very positive reviews. Among all the factors that added up to get them, the reviewers highlighted both the realism and the perfect implementation of the game's tools, so they even considered it the best simulator of the year.

Something very important about F-19 is that no matter how much you can talk about it, there is always something else. If you want to discover it and try another Sid Meier masterpiece, this is your chance to play it directly.