Fantasy Empires is a fantasy role-playing strategy game developed by Silicon Knights and published by Strategic Simulations in 1993 for DOS. 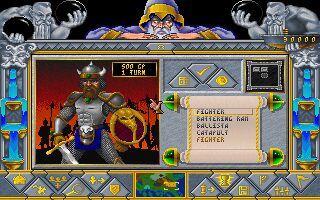 Fantasy Empires is a fantasy role-playing strategy game developed by Silicon Knights and published by Strategic Simulations in 1993 for DOS.

The game is set in the Dungeons & Dragons universe and features commentary from a dungeon master that is computer-controlled.

In true D&D style, you must start by creating your character. This character is only meant to be a figurehead and does not participate in actual combat. You start in your home city, and your goal is to build your empire. You can do this by taking over neighboring towns that are neutral or controlled by your enemies. This can be done by force or by forging alliances. You need to build structures and recruit soldiers to fight in your army to spread your influence further. Other than humans, there are all sorts of fantasy folk who inhabit neighboring areas like dwarves, elves, orcs. These inhabitants can also be recruited into your army once the area is conquered. Not all members of your army use traditional weapons, as some can wield magic instead. Your soldiers gain power as you gain levels. Those that survive multiple battles can also attain new statuses within your army. The map of the world is seen in a top-down view but offers two viewing options. You can either see the entire map clearly or opt for “fog of war” and only be able to see areas you are nearest to.

Fantasy Empires does not lack challenge, and some opponents can be quite difficult to best. There are many options for conquering your enemies, which can be enhanced by those well-versed in the D&D universe. However, this knowledge is not necessary to pick up and enjoy the game.