Hi-Octane is a racing/vehicular combat game developed by Bullfrog and released in 1995 for the PC, PlayStation, and Sega Saturn. 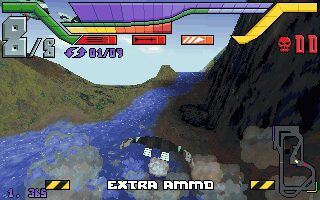 Hi-Octane is a racing/vehicular combat game developed by Bullfrog and released in 1995 for the PC, PlayStation, and Sega Saturn. The game is based on Bullfrog's Magic Carpet engine.

Bullfrog Productions was not a newcomer to the gaming industry as they were the same team that built the legendary Populous series that is highly spoken of. But this time, they tried a different genre. Hi-Octane was a director contender to the Psygnosis' huge success WipEout.

Hi-Octane allows its players to live a universal childhood fantasy, to drive a car that can shoot. Players can literally drive a car with miniguns and missiles loaded up on the front, ready to blow up anyone they want. The vehicles also can hover and are boarded up with armor to protect you from the rest of the competing racers. You can choose from a collection of seven hovercars that range from what looks like a 90's sports car to a huge truck. Your opposing players have only one goal, that is to knock you off the road with everything they have, and trust me, they are hell-bent on doing that!

You can move around the road, collecting icons to boost the power of your car, weapons, and shields, allowing you to survive the massacre. Not gonna lie, it is pretty difficult to survive when there are 7 cars hot on your tail, but unless if you stick to the road and manage not to crash every few seconds, you're good to go. Don't forget to stop by the fuel and shield stops, or you will run out of juice and will be consequently dragged off the track.

The graphics and the sounds are as good as anyone expected, considering the high CPU requirements. The cars and the backgrounds, especially the mountains, look very detailed, but consequently, the game's high graphics mode refused to run on anything less than a Pentium 90 with a VLB or PCI graphic card. The game had great effects; for example, when you change the perspective to driving in the first person, as you get shot, the bullets would pop up on your windscreen; it was mindblowing at the time.

Indeed, the game did not make a name like Wipeout, which got sealed down in the history books, but when you take the game as a whole, it isn't bad at all. The game allows you to drive fast and shoot up the baddies, two of the favorite things a 90's kid wanted to do packed into one neat package.

God I got this game sharwared and pre loaded on my system. Back in 1995, loved it and magic carpet 1 & 2. An few know Decent beat iD software to a true 3D engine with moving lighting effects and full 3D world and 3D enemies years before quake came out.
https://www.youtube.com/wat...
Had a custom made Tower PC 75Mhz pentium with 16MB Ram and basic 2D Video Card, a 1GB hard drive, 2xCD-Rom! How far we have come.