MechWarrior 2: 31st Century Combat is a 3D vehicle combat sim game created by Activision and released in 1995 for MS-DOS. 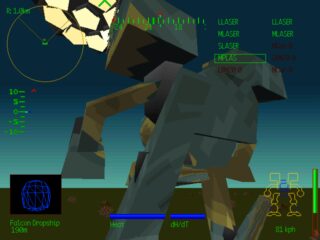 MechWarrior 2: 31st Century Combat is a 3D vehicle combat sim game created by Activision and released in 1995 for MS-DOS. It was ported later to Windows and Mac, in addition to the console versions released in 1997.

The game is the sequel to MechWarrior, released in 1989.

MechWarrior was, in fact, the second videogame of the Battletech franchise, based on a pen-and-paper game. The first game, BattleTech: The Crescent Hawk's Inception was released in 1988, but while this entry was an RPG with a 2D top-down view, Mechwarrior introduced a 3D first-person perspective. Players were finally able to pilot giant robots, watching a realistic 3D world from the cockpit.

There was a 7 years hiatus between the first Mechwarrior and MechWarrior 2, and it could have been worse, due to technical difficulty. MechWarrior 2 was a very ambitious game, pushing the boundaries of 3D gaming as much as possible. The idea was to offer the gameplay of tactical 3D real-time combat sim, but with realistic physics for the giant mechas, with a weight of 100tons. It wasn't easy.

The developers realized that no machine would have been able to run this game, mainly because of memory limitations. The game was only able to show one mecha on the screen. Only when some developers were able to optimize the code, Activision restarted the project, and the game was finally completed and released.

In the beginning, after the beautiful intro, you will have to choose between Clan Wolf or Clan Jade Falcon, and after that, you can start the missions and destroy the enemy mechs and bases. As long as you advance, you will be able to issue orders to the squad. After every battle, you have access to the lab, where you can customize your robot to make it more lethal, which is one of the key features of the game.

In addition to the top-notch gameplay, MechWarrior 2 offers a state-of-the-art cinematic experience. Intro and cutscenes are fantastic, the soundtrack composed by Gregory Alper and Jeehun Hwang was considered one of the best videogame music ever created; scripts, voices, and dialogues create an intense experience.

It's understandable why MechWarrior 2 was a commercial success and why it was voted by PC Gamer, the best action game of 1995.

We are talking about a masterpiece here, that's why we decided to offer you the full CD version of the game. Download it and enjoy!