Master of Magic is a fantasy turn-based strategy game created by Simtex and published by MicroProse in 1994 for MS-DOS. 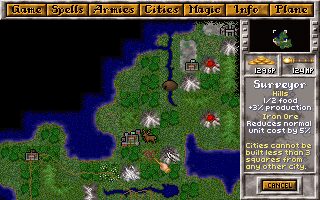 Master of Magic is a fantasy turn-based strategy game created by Simtex and published by MicroProse in 1994 for MS-DOS.

In this turn-based 4X strategy game, that some defined the fantasy version of Civilization, players assume the character of a wizard, exploring the world, vanquishing monsters to obtain treasure, researching spells and creating armies in order to defeat enemy wizards.

When the game was first released, it was full of bugs and featured a poor AI that left many reviewers frustrated. However, after a number of patches the game is now lauded as one of the top games of all time, and despite several similar games being released (most notably Age of Wonders), Master of Magic continues to be one of the best fantasy strategy games to date. In 2000 GameSpy added the game to their Hall of Fame, and the game remains so popular that fans continue to create unofficial patches, even after official game support was discontinued.

With randomly generated maps, character customization, and a seemingly endless range of creatures to summon and spells to cast, every time you play this game it feels like a brand new adventure.

The version offered by GamesNostalgia is the 1.3.1, a patch released in 1995 including all the bug fixes and improvements.