Network Q RAC Rally is the first game in the Rally Championship series. 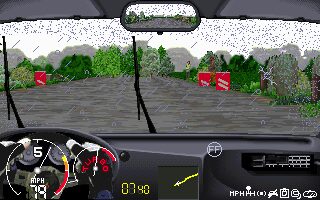 Network Q RAC Rally is the first game in the Rally Championship series. It was developed by Pixelkraft and released by Europress Software in 1993 for MS-DOS.

RAC Rally doesn't have yet the realism, but also the complexity, of the subsequent titles, so it should be considered a mix between a racing sim and an arcade racing game. Players can choose between 5 cars: Toyota Celica, Ford Escort, Lancia Delta HF Integrale, Mitsubishi Lancer Evolution and Subaru Impreza. You will drive in several real tracks of the RAC rally set in the UK. It features nighttime driving, weather effects, navigator voice, manual or automatic gear. This makes the game a fun experience for all the off-road rally lovers.

Protection codes are included in the game archive.