Nuclear War is a strategy game developed by New World Computing and published in 1989 for Amiga and MS-DOS. 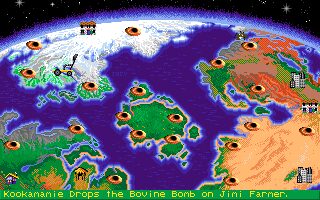 Nuclear War is a strategy game developed by New World Computing and published in 1989 for Amiga and MS-DOS.

The American company until that moment had only presented two entries of the saga Might and Magic. Despite its success, Nuclear War was a separate point to the titles of this company, which followed the line of his two original releases and produced more sequels and spin-offs of them, such as Heroes of the Might and Magic.

This turn-based strategy adventure is founded on satire, where the player must choose 4 characters that are clearly parodies of world leaders, living and dead, to face each other in a strategic duel for world domination. On the other hand, the idea of world domination comes with a social critique. In essence, the way to rule the world is by eradicating other nations with nuclear weapons, and the winner celebrates his victory by jumping with joy in a desolate land.

At the start of the game, the player has several cities inhabited by millions of citizens. The installment is not only about throwing nukes everywhere but also presents the possibility of making strategies, such as stealing people from other villages with propaganda or implementing a defense system when the player thinks that he is about to be attacked. He can also improve his nuclear weapons, whose effectiveness will change according to the prosperity of the cities and the number of people in them.

On the other hand, the AI is well applied, it varies according to what kind of leader you are facing. One can be charismatic and hide behind diplomacy, while another can be much more violent and ruthless. Besides, their actions do not only depend on their personality. Depending on the decisions that the player takes, the NPCs are going to approach him differently depending on how he interacts with the city they defend.

Also, even though the emphasis of the game is not on graphics or sound, the audio effects for the missiles, the laughter of the enemies, and the few images they use hit the mark. The world leaders are drawn in extravagant and funny ways. With a sketch that is typical of satire at that time, such as small eyes, huge and exaggerated facial features, and an accent on any minimal element that defines the character in real life. Far from its colorful and animated essence, the victory screen presents a scenario that congratulates the player with its score. In the background, the actual results of his achievement: a devastated and lonely city sunk in a palette of dark and rusty colors in which only desolation and death inhabit as consequences of the war that has just ended.

The reception of the title was very positive; the critics highlighted the innocence that it seems to have, the perfect parody that was made with the drawing and the compelling but straightforward gameplay.

Whether in the skin of General Infidel Castro, the charismatic Jimmy Farmer, or the peaceful Ghanji, Nuclear War is the perfect excuse to have a fun time, use your brain a little, and why not, to ponder a bit more who are the real winners of the wars.