Supremacy: Your Will Be Done

Supremacy (called Overlord in the US), is a real-time strategy game developed by Probe Software and released for the Amiga and Atari ST in 1990. 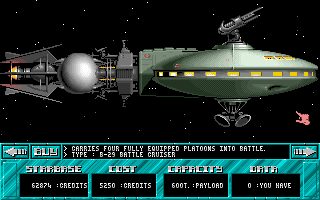 Supremacy (called Overlord in the US), is a real-time strategy game developed by Probe Software and released for the Amiga and Atari ST in 1990. In 1991 it was ported to MS-DOS and Commodore 64.

In this game the player is needed to colonize a planetary network and then protect them from extraterrestrial invaders, all of this is done against a computer opponent that is hell-bent on taking over what you created.

As I first booted up the game, it came as a surprise to me when the difficulty of the game does not depend on the opponent's skill, but rather upon the planets that the player has to colonize and control. The first level contains eight worlds and essential equipment to manage. In contrast, the second level has a total of sixteen planets and slightly better gear as a compromise. The difficulty levels increase progressively. This is a neat system as the challenge of the game is adapted through the player's level of skill and not through the AI opponent as compared to other games.

As I continued my tour, I came across the intro scene, which is something every game looks forward to; it was unforgettable and really made me lean into the game as it was truly well made. From god creating the universe and then blowing it away, along with that killer intro music, sent chills down my spine. However, it was pretty disappointing when I found out that the game has no in-game music as it did take a toll after a few hours of playing, staring at screens and screens of options and menus in-game while playing does get a bit lonely with no tune to keep you company.

When I started to play Supremacy, it came out quite different from other strategy games as it provided a lot more depth through the involvement of multiple factors that correlate to a victory. It takes on the approach shared by the Civilisation series: the player is required to plan and carry out the battle plans, but also are required to manage their colonies; from the taxes to fuel and supplies, everything has to be micromanaged. The game's progression in all of this is represented through little text boxes, the small stream of text at the bottom of the screen is where you will get all the information. Although it seems a bit dull, pretty soon, all the threats and angry declarations from your neighboring extraterrestrial invaders, along with the milestones being completed, will bring enough satisfaction to keep you hooked for hours.

The game really does soak up your time without you noticing. Supremacy went from what looked like a dull game of menus and options to a challenging conquest, where you eventually craved to annoy the hell out of your AI extraterrestrial opponent.

@Anuj You can try to copy the game icon into Desktop instead of Applications. Also, be sure that you are admin on that Mac.