Pegasus is an action game developed by Optimus and published by Gremlin in 1991 for PC, Amiga, and Atari ST. 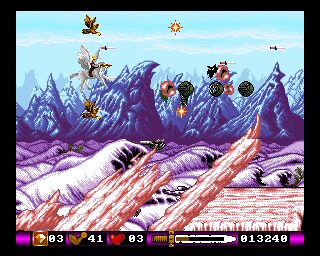 Pegasus is an action game developed by Optimus and published by Gremlin in 1991 for PC, Amiga, and Atari ST.

In this title, clearly inspired by mythology, you are Perseus, and you have to fight Satan and his guardians. Thank god you have the legendary horse Pegasus to help you. In fact, in half of the levels (10 in totals), you will fly on Pegasus, and the game becomes a sort of shoot-em-up. While on the rest of the levels, Perseus walks, so it's more a platformer.

There are five different worlds with different styles. Fantastic graphics, huge sprites, with smooth animations and parallax scrolling. Despite the high number of enemies on screen, the game never slows down. Technically speaking, it's excellent. Unfortunately, in terms of game design, the game lacks some more interesting mechanics such as bonus levels, secret places, special power-ups, and so on. I wonder what would have happened if the developers had to focus on just one type of game.

Anyway, maybe you won't finish it because it will become boring sooner or later, but it's a fantastic game that should be tried at least once.