Pirates! Gold is the remake of Sid Meier’s award winning Pirates! And was developed by MPS Labs and published by MicroProse in 1993 for MS-DOS and Sega Genesis. 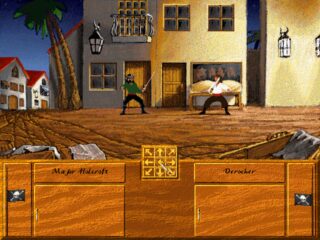 Pirates! Gold is the remake of Sid Meier’s award winning Pirates! And was developed by MPS Labs and published by MicroProse in 1993 for MS-DOS and Sega Genesis. One year later it was ported to Amiga CD32 and Macintosh.

This was the first remake of the original Pirates! and Included some minor enhancements to sound, graphics, and a few other features. For those unfamiliar with Pirates! The gameplay incorporates three different genres, strategy, action, and adventure. Playing in a large, open world, it gives you almost ultimate freedom with no linear storyline to adhere to.

You build your character and start out by receiving a letter of marque which gives them license to attack and capture enemies and bring them before courts to answer for their crimes. You can choose to be in the service of the Spanish Empire, the Dutch Republic, the Kingdom of England, or the French Colonial Empire. This does not mean you can’t decided to change your loyalties later and piracy is always an option. You can also choose one skill for your character to be a master of as well as which era you wish to play in. Each era changes what challenges are faced during the game and ship designs will vary to suit the times. Recruit crew members for your ship, but don’t forget to keep them happy. You wouldn’t want a coup on your hands, would you?

The object of the game is to make a name for yourself and you can do this however you please. Honest trading and seeking out treasures or just pirate and plunder your way through the lands. The choice is yours. The stats of visited lands are randomized from the beginning and will fluctuate and change during your playthrough.This will have an effect on different things, like your wealth. While there is no predetermined ending to the game, your character will age which makes staying in the pirate game difficult. At this point you can choose to retire, thus ending the game. Upon retirement the measure of your accomplishments is taken and the results determine what your reincarnated status will be in your next life.

Pirates! Gold has much to offer newcomers to the game, but it also has new missions and extras for those who are familiar with the original. With so many choices and all that freedom this game has major replay value. What are you waiting for? Set sail!