Rings of Medusa is a fantastic adventure game developed and published by Starbyte Software in 1989 for the Amiga, Commodore 64, Atari, and DOS. 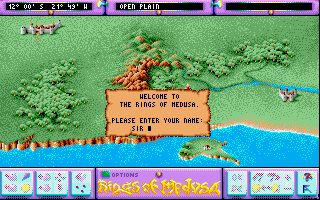 Rings of Medusa is a fantastic adventure game developed and published by Starbyte Software in 1989 for the Amiga, Commodore 64, Atari, and DOS.

The German company founded in 1988 had several titles, including the well-known Space M+A+X (1988), which shares many similarities with Rings of Medusa.

The plot of the game is centered on Cirion of Morenor, a former king's son whose goal is to end the tyranny of an evil sorcerer named Medusa, who dominated his nation and controlled its people. To do this, the prince must travel to different continents in search of five rings needed to rule over Medusa's army and claim his city.

However, the protagonist cannot accomplish this mission without lands, soldiers, and resources. For this reason, the first part of the game will be based on making money to obtain them. The economic system is very complex and realistic. Although there are several ways to obtain funds, such as playing poker and blackjack in a casino, the main one will be based on buying and selling routes that the character will draw around several villages in a caravan. There the player must buy items in a producing city and resell them in other villages at higher prices; the further away from these cities, the higher they can be priced. Meanwhile, there is a constant risk of crossing with wandering armies that if they detect that the prince carries money or goods can engage in a fight, which is avoided by bribing them.

Once the money is in the prince's hands, the title panorama changes. First, the player begins to consider the possibility of conquering continents, which brings new options such as collecting taxes. Also, the user invests in mercenaries and free soldiers. The more the game progresses, and the more troops are obtained, the prince can start investigating temples to get clues of the location of the rings and send soldiers to look for possible sites.

The music was composed by the renowned German programmer and musician Jochen Hippel, known for introducing his generally chipset-like music style to various AMIGA games such as the Turrican trilogy or The Last Ninja. Jochen (who was also in charge of the music of the sequel), produced a track that, with some slow but progressively sharp tunes, gives the game an aura of mysticism and imposition. Therefore, when the intro music starts to play, which would even work great in a horror game, the player is surrounded by an atmosphere that implicitly anticipates that he is about to enter a world that he will have to take seriously.

The release received mixed reviews, but it got a lot of fans, especially in Europe. Rings of Medusa also received a sequel in 1991, which continues the history of the original title, but with different gameplay, and a remake in 1994 (available only in German).

If you are a fan of strategy games, but you can't box yourself in one style, you have to give Rings of Medusa a chance. But be careful, you're going to start off managing a city and end up playing poker for hours without realizing it.