Rome: Pathway to Power, also known as Rome: AD92, is a game created by Firstlight and published by Millennium Interactive in 1992 for the Amiga and MS-DOS. 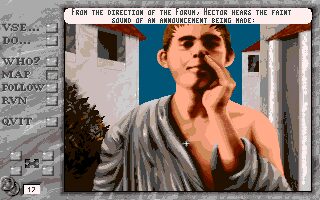 Rome: Pathway to Power, also known as Rome: AD92, is a game created by Firstlight and published by Millennium Interactive in 1992 for the Amiga and MS-DOS.

The title, designed by Stephen Grand and Ian Saunter, maintains several elements of their previous title, The Adventures of Robin Hood, changing the settings to ancient Rome. The view is isometric, and as soon as you start playing, it will remind you of Populous. In fact, you will also see the little people freely roaming in the environment, going to the baths, talking, and doing their activities. Your hero, controlled with the mouse and the toolbar, will be free to explore and interact with them, trying to complete the missions. The final goal is not easy: starting as a slave, you will need to become the Emperor of Rome. Not bad, eh?

Defining the game is not easy. At first sight, it looks like a god game, but the plot is complex, almost like an adventure, while your character will advance and complete quests like in RPG. The world is open, but unlike Robin Hood, the game is divided into 6 main missions, which is a nice improvement and helps playability. You will never feel too "lost."

More positive elements include the graphics, in my opinion, much better than Populous or Populous 2, and the sound effects, that follows you while you explore the world. E.g., when you are close to a fountain, you will hear the water. The ancient Rome settings are brilliant, and this time the creators added to the game an excellent sense of humor (how not to mention the two consuls of Rome "Seganus Megadrivus" e "Nintendus Gameboiis").

Rome: AD92 is an almost unknown game, so the definition of "hidden gem" in this case is simply perfect. Try it!

Great little game. Came as part of my Amiga 600 back in the day.

Anyone know how to load a saved game? Everytime I exit I have to start again from scratch.