Shadow Sorcerer is a fantasy RPG created by Strategic Simulations Inc and released in 1991 for the Amiga, Atari ST, and MS-DOS. 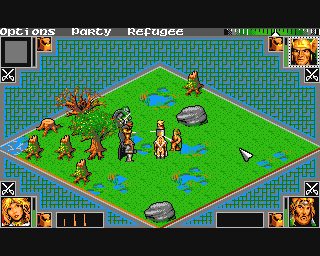 Shadow Sorcerer is a fantasy RPG created by Strategic Simulations Inc and released in 1991 for the Amiga, Atari ST, and MS-DOS.

The title is tied to the famous Dragonlance Chronicles written by Margaret Weis e Tracy Raye Hickman, novels that defined the Dragonlance settings of Dungeons & Dragons.

The year before, SSI released another title based on the Dragonlance settings, Champions of Krynn, the first or the Gold-box trilogy set in Dragonlance. But in that case, the player had to create new characters. With Shadow Sorcerer instead, SSI used the official TSR license to take Tanis, Sturm, Goldmoon, Raistlin, and the other heroes into a videogame. It's also probably not a coincidence that the game uses an isometric perspective that makes the characters look like D&D miniatures. In general, SSI really paid attention to the graphics; they also used the fantastic drawings by Larry Elmore (who created the covers of the books) for the initial screen of the game and the characters portraits. Despite being made with a few pixels, Tanis and his friends look like the one you saw in the books. That's very cool.

Unfortunately, in terms of gameplay, things didn't go equally well. The game is mostly based on combat, but after a while, the fights become boring. It would have been better to add more explorations, dialogues, and the other elements that work well in other isometric games such as Ultima VI. If you think that, the same year, SSI released a masterpiece like Eye of the Beholder, you feel sad for the Dragonlance heroes: it would have been great to manage this party in a first-person dungeon crawler. But I guess making a game such as EOB, it's not so easy.

Said that Shadow Sorcerer is a game that was able to capture his own small group of fans. If you loved the books, it's almost mandatory to try this game.

Sorry, for copyright reasons we cannot provide any download link.
We suggest you to search on the GOG Store to see if the game is available.