SimLife: The Genetic Playground is a simulation game developed and published by Maxis in 1992. 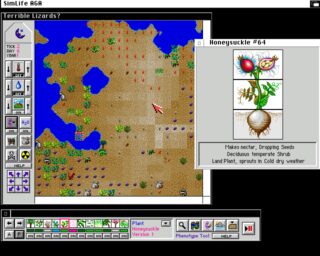 SimLife: The Genetic Playground is a simulation game developed and published by Maxis in 1992. The game is part of the long list of "Sim" games created by Maxis, but Will Wright didn't have a role in this one. Simlife was designed and programmed by an independent developer called Ken Karakotsios.

Released initially for Macintosh and Windows 3.x, in 1992, it was ported to Amiga, including a version for AGA machines (A1200, A4000). It was the first case of an AGA game released before the standard one. Of course, the AGA had far better graphics. SimLife was super CPU intensive; the simulations would often crank a computer to its limit even on an A4000.

First of all, I have to say that the game has a huge manual. That is quite understandable regarding the depth of the game since it is a world simulation program. If you don't read it, you won't appreciate it. Most of my friends found it annoying because they never read it.

SimLife has some of the most in-depth simulations I have ever seen in a video game on this genre. You can literally control anything sensible that is related to a progressive world: the intelligence of animals, the climate, how many offspring you want from a particular species, what species you want the world to have, and even simulate a natural disaster. This game was an early Christmas gift for kids that had ambitions of being an environmentalist or an ecologist.

SimLife requires patience, just like actual evolution! But there are really some cool features: modifying the genome of creatures, you can evolve your llama into a flying bird, make your chickens immortal, create a living army of immortal birds; the possibilities were endless. The ability to change the physics of your world? Totally doable with a few minor tweaks. The game kept records of your action, so you can trace back what you did and realise where something went wrong.

Once you have overcome the first difficulties, the game is fantastic, thanks to in-depth playability. It is the most in-depth life simulation game I have ever played, taking into account all the biological, creative, physical variations you can make to the planet. All "sims" enthusiasts should not miss it.