Starcross is an interactive fiction/text adventure published by Infocom initially in 1982. 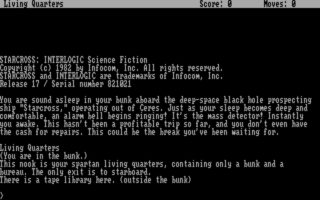 Starcross is an interactive fiction/text adventure published by Infocom initially in 1982. The story was written by Dave Lebling, one of the authors of Zork.

As many Infocom games, it was released initially for the TRS-80, Apple II, and Atari 8-bit. Later it was ported to several other platforms including MS-DOS, C64, Amiga, Atari ST.

It was the fifth adventure created by Infocom and their first science-fiction title. It's set in a spaceship (called Starcross) in the year 2186, where humanity has colonized the Moon, Mars, and many other planets. The story and the settings are clearly influenced by the famous A. C. Clarke’s novel Rendezvous with Rama, written 10 years before. Starcross will allow you to explore vast deserted scenarios, filled with mysterious alien artifacts. It’s a game with a dark, fascinating, atmosphere. Many of the puzzles require some scientific knowledge, that’s why this entry was listed in the Infocom inventory as ‘Expert’ level.

Starcross is a cult title, those who own the legendary saucer package are really lucky. The others, can at least play this fantastic adventure. My only suggestion: use a tutorial.

We packaged for you the DOS version, ready to be launched and played. Have fun!