The Abbey of Crime Extensum

The Abbey of Crime Extensum is the 2016 remake of the 1987 ZX Spectrum game La abadía del crimen by Paco Menéndez and Juan Delcán. 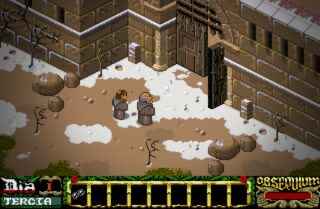 The Abbey of Crime Extensum is the 2016 remake of the 1987 ZX Spectrum game "La abadía del crimen" by Paco Menéndez and Juan Delcán.

This free adventure was developed by a Spanish team of fans of the original game: coding was made by Manuel Pazos and the graphics by Daniel Celemín. It was released in 2016 on the official website and Steam.

La abadía del crimen (or "abbey of crime") was a game inspired to Umberto Eco's novel and Jean-Jaques Annaud's film "The Name of the Rose". Unfortunately, the original makers never got the rights to use the title of the novel, so they had the release the game with a different name. Despite this, the plot of the game, the characters, the locations, are exactly the ones of the movie.

The remake features gorgeous graphics, brilliant pixel art faithful to the style of the original ZX Spectrum game (maybe more the Amstrad CPC). You navigate through the beautiful isometric world controlling your characters, the monks William of Baskerville and his young novice Adso, trying to discover the murderer in a medieval Italian abbey.

If you like adventures, mystery, and medieval locations, not mentioning the novel or the movie, this is a freebie that you cannot miss.

Below you can download the original Java version, packed for Windows. If you have a Mac, or if you prefer the Steam version, you can get it here.

Game and manuals are available in English, Spanish, French and Italian.