Tiny Bobble is a modern conversion for Amiga of the famous coin-up Bubble Bobble. 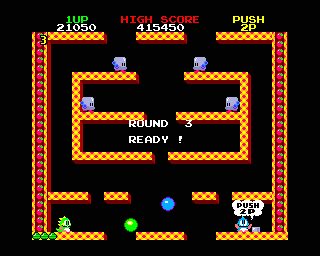 Tiny Bobble is a modern conversion for Amiga of the famous coin-up Bubble Bobble. The fantastic work, made by Bartman and Pink of the demo scene group called "Abyss," started in 2018. It was completed in 2020 with the release of Tiny Bobble version 1.0 in the public domain.

The authors' goal was to improve the original Amiga conversion of the arcade Bubble Bobble, made by Software Creations in 1989. In reality, the original conversion was not so bad. Still, it suffered from a bad practice that was common at that time: develop the games simultaneously for Atari ST and Amiga (or develop for ST and then port to Amiga). This means many games, including this port of Bubble, were not using all the Amiga hardware's potential.

Tiny Bobble doesn't have this problem; it was developed exclusively for the Amiga in C/C++. So it succeeded in improving the original in many aspects. First of all, it has almost all the sprites animations of the original game (not just around 20% of them), it uses 5 bitplanes, which means 32 colors on screen - not just 16, and it runs at 50fps instead of 25. The screen height is 224 pixels, like the arcade (24 more than the Software Creations version). It has 150 objects (3 times more); player two animations, intro animation, Animated Extend screen, animated boss fight, multiple endings, and much more. The music and sounds effects were re-made to be more faithful.

What else can I say.. just play it!