American McGee's Alice is a third-person action-adventure developed by Rogue Entertainment and published by Electronic Arts in 2000. 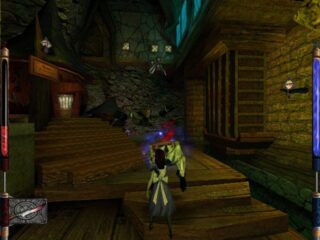 American McGee's Alice is a third-person action-adventure developed by Rogue Entertainment and published by Electronic Arts in 2000.

This entry is named after its renowned director and designer, American James McGee, who also worked on the Doom, Wolfenstein 3D, Hexen, and Quake sagas. Also, he was in charge of directing the highly successful sequel Alice: Madness Returns and is currently working on the third part called Alice: Asylum.

The game is based on Alice's Adventures in Wonderland and Through the Looking-Glass, novels written by Lewis Caroll in 1865 and 1871. Unlike the lighthearted tone of the source texts, this version has a much darker setting. Shortly after the original story, Alice is the sole survivor of a mysterious fire that takes her family and home, making her an orphan. This strongly traumatizes the protagonist, who enters a deep depressive well and becomes catatonic. She is later taken to the Rutledge psychiatric hospital, where she is constantly abused by its workers.

Ten years later, Alice is once again summoned to wonderland by the white rabbit, who tells her that only she can save it from the tyranny of the queen of hearts. Being torn by its distorted psyche, this place is not the same as it was before, but a twisted and macabre version of it. Very similar to the story of Silent Hill 2, the characters in this universe are a representation of Alice's emotions, so many of them return as enemies. Thus, only with the help of the white rabbit and the Cheshire Cat, the heroine embarks on a dangerous mission where violence is the only way to solve the problems.

At the beginning of the adventure, Alice must visit 9 provinces, now dystopian versions of the places she used to happily frequent. To finish with their inhabitants, she has several toys modified to serve as weapons, such as dices, cards, or surprise boxes. On the sides of the screen, there are two big bars, one red and the other blue. The red bar represents the sanity of the protagonist, which will be reduced when Alice is attacked and will kill her when emptied. On the right, the blue bar symbolizes her will, which is necessary to carry out special attacks. Both bars can also be filled as the player collects the essence of their corresponding color.

The game works like a classic 3D action-adventure, with platforming elements. In her visits to the different worlds, the heroine must defeat several enemies to be able to advance and confront the different bosses at the end of each level. Besides, the path is full of traps and floating platforms, so the combat is not the only aspect that is focused on the title.

American McGee's Alice stands out in the graphics. This universe is sunk in a gothic aesthetic where, apart from the sidebars and the essence, no color is allowed to shine. The palette may be diverse, but there is a predominance of different shades of gray and, to a lesser extent, reds that suit the dark nature of the story. On the other hand, some segments deviate totally from this idea and present aesthetics that leave horror aside to carry more psychedelic and mysterious themes.

The excellent soundtrack was directed by Chris Vrenna, winner of a Grammy award with the band Nine Inch Nails, led by Trent Reznor. The sounds were generally composed of toys and voices of women and children. Altered by a great editing process, the title achieved macabre and uncanny music that accompanies the player during the adventure.

The game received positive reviews by critics and high acceptance by the fans. The main points to highlight were its audiovisual resources, which present an innovative and distorted aesthetics concerning the original source.

After being only known as a good title at the time of its release, today, it is considered a cult game. Not only is it a fun, challenging adventure, but it is also a work of art that gave rise to Alice: Madness Returns, a sequel that also achieved a resounding success. For all this and much more, American McGee's Alice should not be on the pending list of any fan of the genre, who should give it at least a chance.