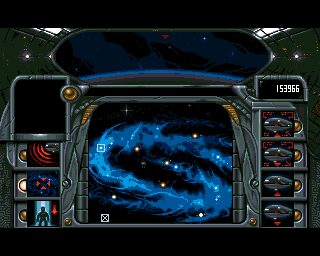 The game is a mix of role-playing, space exploration, trading and a bit of dungeon crawling. You control the crew of the spaceship Whale, and you start by creating four characters, choosing between several classes (Soldier, Medic, Monk, Psionic, Biochemist, Bounty Hunter, Electrician, Rhetorician, Pilot, and "Cybertechnician").

With your spaceship, you will need to travel from one planet to another, and at each port, you can buy and sell goods. You can also land, and once on the surface, the game becomes a sort of dungeon crawler. In a way, it's a kind of precursor of Mass Effect. Unlike the first game, in Whale's Voyage II the exploration happens in real 3D. It is one of the few RPGs - another one is Ambermoon - to provide this feature on the Amiga.

Whale's Voyage II is an excellent game that received very positive reviews from several magazines. Good story, great intro, beautiful graphics, and the right combination of RPG and trading. Maybe the only weak point is the turn-based space combat, but you can't have everything.

The game was officially released only in German, but several years later one of the developers released a patch that translates the game to English. And this is what you can download now from GamesNostalgia. Enjoy!