Wonderland is a text adventure developed by Magnetic Scrolls and published by Virgin Mastertronic in 1990 for DOS. 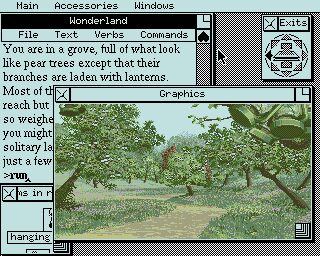 Wonderland is a text adventure developed by Magnetic Scrolls and published by Virgin Mastertronic in 1990 for DOS. It was ported to the Amiga, Atari ST, and Acorn 32-Bit the following year. The story and visuals of the game are based on the Lewis Carroll novel Alice in Wonderland.

Stepping into the shoes of the iconic Alice herself, take your very own trip into Wonderland. Though the storyline of the game follows the basic framework of the novel, the developers put their own spin on many things throughout the world to change it up. Most of the game is played by typing in commands, but there are certain instances where some commands will appear in another menu that can be selected. The game itself is split into different windows, the main story, visual, inventory, map and others. Each window can be sized and the configuration of them can be changed to suit your preferences. As you play you will explore Wonderland, meet zany characters and solve puzzles.

With it’s inventive story, visuals, and manageable interface, Wonderland garnered excellent reviews upon its release. The game is well-suited to just about any age and level of experience with adventure games. If you have played the Pawn or Legacy, you already know Magnetic Scrolls means high quality games. Have fun!