Zeppelin: Giants of the Sky

Zeppelin: Giants of the Sky is a business simulation/strategy game developed by Ikarion and published by Microprose in 1995 for Amiga and MS-DOS. 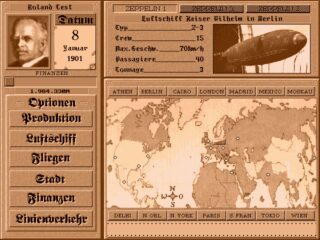 Zeppelin: Giants of the Sky is a business simulation/strategy game developed by Ikarion and published by Microprose in 1995 for Amiga and MS-DOS. that puts you in charge of a Zeppelin company in 1900.

People who consider themselves "young adults" have an important role in the history of video games. We still remember the first games pretty fondly, but we are also looking forward to some of the latest releases. One could say that we saw it all... Or so I thought before I found out that there is a game about zeppelins. I´m not talking about a game with a zeppelin background or that the protagonist is obsessed with zeppelins, but a title based exclusively on them and their administration. For good or ill, this is Zeppelin: Giants of the Sky.

The game was developed in 1994 by Ikarion for the Amiga and DOS. It was the company's first released title.

The game's plot is quite simple, not going to be that something more complicated will draw attention to the... Zeppelins. Basically, it's about one person - or two depending on the number of players - that just inherited a shipyard of zeppelins. Your duty is to bring the company to success. If you ask me, I would have sold it, but we must consider that the game is set in 1901, where these trips were still a novelty.

To be fair to the game, this also has other elements besides the zeppelins. The title's economic part is the most important one, where the player buys and sells the zeppelins. Moreover, we must consider several factors such as external investors, passenger tickets, characteristics of each zeppelin concerning them, and the company's finances in general. The game also has real historical events that are seen through newspapers and a romantic interest so worthy of that time that just remembering the dialogue makes my eyelids feel heavier, and I just wanna go to sleep.

Usually, my favorite part of a review is when I analyze the graphics and sound, but not in this case. Although I recognize that my feelings are very subjective in this particular case, I did not appreciate the developers choices. First of all, the whole title was dyed in an old yellow with the idea of transporting us to that time. I understand that they try to emulate that period and put us in their environment. Still, being a game about zeppelins, they could have taken advantage of the romanticism generated around those trips to draw a pretty landscape.

I recognize that it is extensive regarding the music and sound effects, and there are several soundtracks for each situation. On the other hand, some of them are unbearable. Their loud and endless tones compete and step on each other. As if that weren't enough, even abstracted from that musical madness, they would manage to be quite annoying on their own. Anyway, some other songs are fine.

I guess not everyone must agree with my perception of Zeppelin: Giants of the Sky. In general, their reviews were mixed, which I can understand since the title has acceptable aspects. Despite everything said, I could easily recommend this game to those who love the administration and economic management and those who want to learn a little history in the process.

Note: we haven't been able to find the game manual so far. If you have it, please contact us. Thanks!