1869 (also known as 1869: History Experience Part I) is a business/managerial simulation set during the golden age of clipper ships. 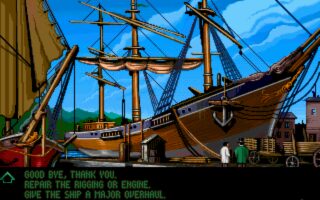 1869 (also known as 1869: History Experience Part I) is a business/managerial simulation set during the golden age of clipper ships. It was created by the Austrian company Max Design and released in 1992 for Amiga and MS-DOS. The Amiga version supports the AGA chipset, with 256 colors graphics.

Designed by Wilfried Reiter, Albert Lasser and Martin Lasser, this economics trading simulation supports up to 4 players, each one of them representing the owner of a sea trading company.

There is no action in this game, just management. You will have to purchase goods in the right port and sell it to another port to make money. You will have to expand, purchasing new ships and establishing new trade routes. You can also transport passengers in some occasions.

The game is challenging and it won't be easy to avoid bankrupt. If you want to test your merchant skills, this is the game for you.