Anno 1602: Creation of a New World is a construction, management, and business simulation developed by Max Design and published in 1998 by Sunflowers Interactive in Europe. 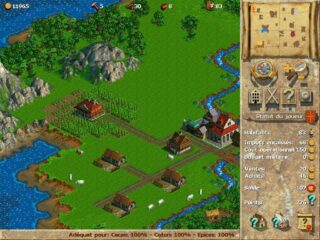 Anno 1602: Creation of a New World is a construction, management, and business simulation developed by Max Design and published in 1998 by Sunflowers Interactive in Europe. In 1999, GT Interactive released the game in the United States, changing the title to 1602 A.D.

With the previous creation of 1869, the Austrian company already had experience with historical sims. However, Anno 1602 was its first big success, with two million copies sold, which basically avoided the small studio's bankruptcy and started the popular Anno series.

This strategy game places us in the year 1602 AD, in which the player represents an expanding European nation. The objective of the game to discover, customize, and manage as many islands as possible.

While other installments would focus the gameplay on constructing weapons to combat other players, this is totally overlooked in 1602 A.D. This game's focus is on improving the nation's technology and economy, but not for warlike use, but internal growth and the satisfaction of its citizens. The latter plays an essential role because people's happiness infers a beneficial feedback process for the player. In essence, a well-maintained colony makes the citizens happy, and their joy ensures that they perform better in it.

On the other hand, the welfare and size of the population do not only have economic repercussions. As the player expands his colony, new options are added to improve and build more massive and more imposing buildings. Likewise, as civilization progresses, it slowly takes on a more conquering orientation, with more options for attack. Despite this, the entry does not lose its economic-strategic nature, and the maintenance of these buildings requires constant flows of money.

Although it belongs to a game style that usually does not try to be a breakthrough in the graphics part, 1602 A.D. has its own characteristics that distinguish it. First of all, it uses more intense colors in contrast to the opacity that these titles usually handle. As the town evolves, the green colors belonging to the newly conquered islands gradually disappear and are replaced by warmer ones belonging to the houses' roofs, which indicates constant urbanization. Along with this, the stereotypes of white houses with orange, red, and brown roofs, combined with the music that is intentionally used, continually reminds the user that he is in the modern age.

The reception of the critics was excellent. Anno 1602 was a surprising and highly addictive game. With complex systems that would later be used again by many titles of this millennium, 1602 A.D. was considered one of the most influential titles that followed. Max Designed created a sequel, called Anno 1503, but after that (in 2004), the company ceased to exist. However, the Anno series is still alive, with Anno 1800 released in 2019.

With the classic characteristics of these strategy games, this title is an excellent alternative to take a breath of fresh air and test your business and construction skills with a very different approach.

Remember to buy the full version on GOG if you like this game (see the link on the top right).