A-10 Tank Killer is a flight simulator developed and published by Dynamix and released for DOS in 1989. 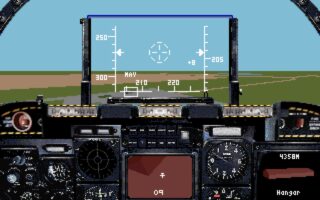 A-10 Tank Killer is a flight simulator developed and published by Dynamix and released for DOS in 1989. An enhanced version that improved the sounds and graphics was released for the Amiga in 1991.

This new version also added a new set of playable missions to the mix. Dynamix is the studio that brought us the Aces series, though this is their ancestor.

This game puts you in control of the titular A-10 Thunderbolt II, nicknamed the “Warthog.” You will primarily spend your time taking out enemy tanks, but you will get the chance to destroy several other structures as well. You get to experience multiple camera angles as you play through a variety of missions. Pilot AI is capable of acting without commands from you and planes land themselves. You are briefed before the missions and can fiddle around with your weapon loadout before you start. You are debriefed following each mission and then move on to the next. Try not to leave any loose ends during your missions as this can come back to haunt you later on.

One thing to keep in mind is that Tank Killer does not strive for realism, just fun. The plane is even altered to include a backseater (the A-10 being a single seater in real life) so that you could have a little company while in combat. So long as you are not a stickler for perfect accuracy, this title is a fun flight sim and war game.