ABC Wide World of Sports Boxing (aka TV Sports Boxing) is a licensed boxing game developed by Acme Interactive and Cinemaware Corporation, and published by Data East USA in 1991 fo... 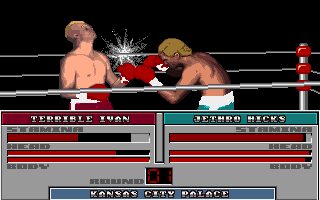 ABC Wide World of Sports Boxing (aka TV Sports Boxing) is a licensed boxing game developed by Acme Interactive and Cinemaware Corporation, and published by Data East USA in 1991 for DOS and Amiga.

In Europe the game is considered a part of Cinemaware’s TV Sport’s Series, including TV Sports Baseball, Football and Basketball.

In this boxing game you can step into the shoes of your very own boxer. You start with character creation where you can pick your fighter’s appearance right to their shorts color. This creator also allows you allot a certain amount of points into your character’s beginning stats, like stamina and strength, as well as choose their fighting style. Once that is done you can enter the Training Camp to find your manager and trainer. Don’t worry, you’re not stuck with them, once you make enough money you can replace them. You earn money from fights, but not just if you win. The amounts of money vary and there is also the management cut to consider. Your goal is to reach the title of Champion by beating everyone else, but it’s not as easy as it sounds. The whole things puts in mind of the more recent Fight Night series.

The game enjoyed a very positive reception and is considered one of the best boxing games ever by fans. So if boxing’s your thing, check it out!