The Adventures of Lomax

The Adventures of Lomax is a platformer created by Psygnosis and released in 1996 for Windows and Playstation, as a spin-off of the famous game Lemmings. 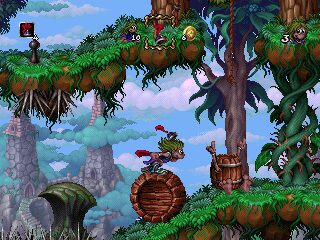 The Adventures of Lomax is a platformer created by Psygnosis and released in 1996 for Windows and Playstation, as a spin-off of the famous game Lemmings.

The artist that designed the game was Henk Nieborg, known for Lionheart and later for Flink, a game that shares many features with Lomax.

When I played my first Playstation game as a kid, it was the classic Ape Escape. The first level was quite small, but since it was the first 3D game I played, I felt that it was huge, and I quickly lost myself climbing an enormous mountain (which when I revisited the game a few years later, I realized that it was a three-meter hill). The point is that when I began to play games with this technology, I refused to return to the 2D platformers for years, and I was not the only one. This type of game was left behind, and the few that came out, whether good or bad, were destroyed by the critics. More recently, the market is much wider, and either by nostalgia or preference, these games may have the opportunity they were never given.

The Adventures of Lomax is a clear example of this. The title was developed and published by Psygnosis in 1996, also known for developing the Wipeout and Lemmings saga. Despite being an original PlayStation entry, it was also released for Microsoft Windows.

To be fair, this is not the review of a work of art that couldn't turn the world of video games just because it came out 3 years late; the game has its weak points. For example, the story is about a character named Evil Ed (a name that makes us think for some reason that he is evil) turns the hero's friends into monsters. This is how the protagonist, a little Lemming, must use his magic helmet to stop the villain and return everything to normal. The only thing that this plot brought to my life is to know that 20 years ago, speedrunning was already a thing because I don't think they thought about this idea for more than 10 minutes.

Things get a little better in the gameplay; the main character must attack by spinning (like Crash Bandicoot) the other lemmings that were transformed into bigger and more dangerous beasts (like Sonic the Hedgehog). The hero must also collect coins along the maps to win lives (like... Well, like almost every game).

On the other hand, it seems that I only talked about the game as a copy to better ones so far. Although this is something that I could keep on doing, if I compare the maps to the ones in Earthworm Jim and Donkey Kong Country, it is fair to say that this game has many strong points. First, the main character goes through its adventure with a magic helmet with which it can interact in several ways, such as using it as a shield. The Lemming can also build bridges or blow up obstacles.

Then, other big differences arrive in the audiovisual part. Firstly, as the adventure progresses, one can notice that the game takes a bigger and bigger horror approach. You would think that Lomax has absolutely nothing to do with that genre... And you would be right. Despite having maps and settings that would be ideal for terrorizing someone in another title, the game's music and style make this clash only conceptual. Speaking of music, you feel a funky 80's vibe combined with some pop in every moment. The audio can become mysterious or tribal in support of the theme of the map, but always with another more energetic and animated background that maintains the adventure's energy.

As I said before, the game received negative reviews. It came out on the same console and almost simultaneously as Crash Bandicoot when 2D games were dying. Maybe it's not the most creative, original, or interesting game, but if you are a fan of the platformers, The Adventures of Lomax can make you have a good time. Despite its limitations, it was really underrated, and you should definitely give it a try.