Claw is a 2D platformer developed and published by Monolith Productions as a PC exclusive in 1997. 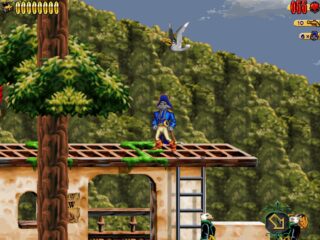 Claw is a 2D platformer developed and published by Monolith Productions as a PC exclusive in 1997.

Despite the fanmade adaptations and the repeated attempts to continue the story officially, it did not receive any sequel.

In a year that witnessed the birth of titles like Castlevania: Symphony of the Night, Mortal Kombat 4, and Grand Theft Auto, the company responsible for the creation of Blood had another idea that would separate itself from the recently mentioned games. The goal was to produce an adventure that, in a market dominated by releases with very adult or violent themes, can be enjoyed by the family and appeal to an audience of any age. At the end of the day, with a beautiful drawing and a great script, Claw would arrive.

The plot of this funny delivery circulates around the main character, an anthropomorphic pirate cat, and his search for the 9 lives amulet and its 9 gems, relics that, when combined, give the user near-immortality. But this is not an easy task: the feline not only has competition but also must escape from prison.

As the adventure progresses, the player gradually forgets that he is dealing with anthropomorphic animals and comes to consider them human. This is because every character in this title is meticulously written. Each one possesses motivations and personalities so well defined that one cannot help but suspect that the critically acclaimed Bojack Horseman may have drawn some inspiration from them. Likewise, this whole chain begins with our protagonist, who, with a brave and playful attitude, is far from being the empty vessel that many other games choose to feature.

On the other hand, Monolith also did a superb job on the playable part. Without the need to overwhelm the player with excessively complicated levels from the beginning, they perfectly handle a progressive difficulty that forces him to improve (a lot) as he advances through the story. In the same way, the controls seem to share the philosophy of the whole game: easy to learn, hard to master.

Finally, the installment also benefits from a considerable repetition value. It has endless secrets and hidden rooms full of treasures, bosses with very varied mechanics, beautiful aesthetics, and levels challenging enough so that when the player wants to resume the adventure, it still feels fresh.

Although it has received varied, albeit positive, criticism, Claw was born in an era when the market had a totally different target and went under the radar for many people. Today, it has aged very well, is considered a cult classic, and has earned the respect that so rightly deserves.

If this is the first time you hear about this lovely cat or just some childhood memories came back to you, do yourself a favor and add this fantastic classic to your library, you can thank me later.

Why does this contain Trojan:Win32/Vigorf.A