Blake Stone: Planet Strike! (a.k.a. Blake Stone: Firestorm) is the sequel to the original Blake Stone and was developed by JAM Productions and published by Apogee in 1994 for DOS. ... 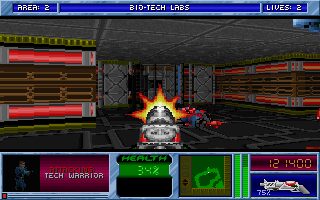 Blake Stone: Planet Strike! (a.k.a. Blake Stone: Firestorm) is the sequel to the original Blake Stone and was developed by JAM Productions and published by Apogee in 1994 for DOS. Like its predecessor, it made its way to Windows, Mac, and Linux in later years. Interesting fact, this would be the last game before JAM ended up folding.

Planet Strike! picks up where Blake Stone: Aliens Of Gold left off. Goldfire managed to escape in the first one and go into hiding for several years. Now that he’s been found, it’s up to Blake to take out the evil scientist once and for all. Delving deep into his new evil lair, you will need to take out his new guards and disarm security to proceed to reach your target.

The title uses the Wolfenstein 3D engine like the predecessor. The gameplay is pretty much the same, with a few changes like new weapons and enemies. This makes it easy for you to pick up after beating the first one.

Blake Stone: Planet Strike! was not as well-received as the previous one, but it is definitely a worthy sequel and conclusion to the thrilling story of the evil Dr. Goldfire. If you played the first one, you would definitely need to see how it ends.