No One Lives Forever

Available Platform: Windows - Alias: The Operative: No One Lives Forever

The Operative: No One Lives Forever, also known as NOLF, is a first-person shooter/stealth game created by Monolith Productions and published by Fox Interactive for PC in 2000. 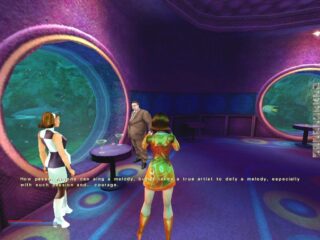 The Operative: No One Lives Forever, also known as NOLF, is a first-person shooter/stealth game created by Monolith Productions and published by Fox Interactive for PC in 2000.

If you take a 007 movie of the '60s, with its "cold war" atmosphere, and a bit of Austin Powers, with its humor and bright colors, you have the settings of this game. Add a sexy female spy with a British accent and a lot of cool gadgets (Peggy Carter, or if you prefer, Sydney Bristow from Alias maybe?). Mix all of this in a gameplay that is mostly a first-person-shooter but where stealth plays an important role, and you can have an idea of this fantastic game.

All of this, supported by a compelling story with great dialogs, beautiful and diverse locations all around the world, and fantastic music that can easily be mistaken for the soundtrack of a spy movie of the 60s. You will use different weapons, but also gadgets such as Spy Glasses, Lipstick Explosive, Sleeping Perfume and more.

No One Lives Forever won several prizes for Game of Year in 2000; in fact, in 2001, the GOTY edition was released. The game is not for sale anymore, and it's freely downloadable. Thanks to the website nolfrevival, you can download the complete GOTY version, including all the patches, perfectly working in fullscreen in widescreen resolutions and compatible with Windows 10.

This is seriously one of the best games I have ever played. If you have never tried it, it's really time to do it.

Thanks for adding another amazing, and in this case RARE! game to your outstanding catalog...keep it up guys!

NOLF is really amazing. I didn't play it at the time, so I'm playing it now, and it easily beats many modern games. Unfortunately it wont be easy to make Soldier of Fortune playable on Win10, but let's see.
Thanks for being a great supporter of GamesNostalgia!

Thanks for this gaming-gem! So much fun to experience the loony story, played NOLF2 years ago and remember another fine vintage game named 'Soldier of Fortune 1+2'. Guess you know it 8*) So this is (after you added 'Reunion' there was tabula rasa for a short time) my new entry on my wishlist - but first things first, looking forward to NOLF2 and whatever comes to your mind. Carry on, we all count on you...