No One Lives Forever 2 is a first-person shooter with stealth elements created by Monolith and published by Sierra in 2002 for PC and Macintosh. 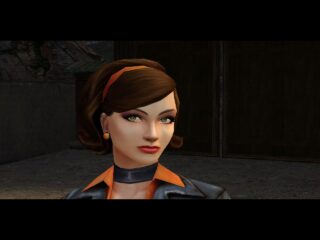 No One Lives Forever 2 is a first-person shooter with stealth elements created by Monolith and published by Sierra in 2002 for PC and Macintosh.

As you may imagine, NOLF2 is the sequel to No One Lives Forever, which was released 2 years before. For the ones that don't know what I'm talking about, it's an action-shooter set during the cold war, with a sexy and smart Scottish spy called Cate Archer as the hero. The title designed by Craig Hubbard takes inspiration from 007 films, but also from Austin Powers, with its humor, vivacious colors, and '60s music. But Cate is a real hero, like Lara Croft, and this time she will have to face ninjas in Japan and a squad of super soldiers in Siberia and Antarctica, plus of course a lot of Russian spies. At her disposal, she will have a lot of different weapons and disguised gadgets, as you can expect from a 007 movie.

The gameplay is similar to the predecessor, with a choice between a more stealthy approach or a more aggressive one. The only change is an improved AI for the enemies, which also respawn more often. In the original game, once an area was cleaned, you were able to stay undisturbed as long as you wish, which was a bit unrealistic.

The game you will download following the link is the full patched game, compatible with Windows 7 or 10. Enjoy!

Download No One Lives Forever 2: A Spy in H.A.R.M.'s Way - Windows Version