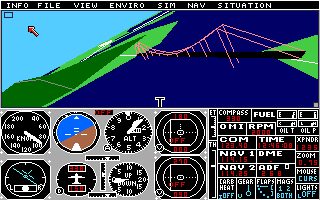 Flight Simulator II was the last sim to be released on Amiga and Atari ST.