Gettysburg is a wargame created by Turcan Research and published for Amiga, Atari ST, and MS-DOS in 1990 by Atari. 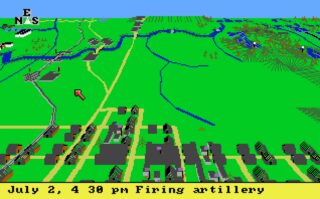 Gettysburg is a wargame created by Turcan Research and published for Amiga, Atari ST, and MS-DOS in 1990 by Atari.

As you can imagine, it's set during the American Civil War, in particular, the battle of Gettysburg, the bloodiest of the entire war. The battle took place from the 1st until the 3rd of June, 1863. You can choose to control either the Union forces or the Confederate forces, lead by famous general Robert E. Lee.

The game engine is the same used in other wargames developed by Peter Turcan, such as Austerlitz and Waterloo. The player gives orders from a top-down 3D view of the battlefield.

Thanks to the fantastic recreated maps, sound effects, high realism, and perfect 3D graphics, Gettysburg is considered one of the best historical wargames ever created. The user-friendly interface makes his appealing also for players not used to this kind of game.