Ghostbusters II is an adaptation of the famous movie by Ivan Reitman, the sequel to the 1984 film Ghostbusters. 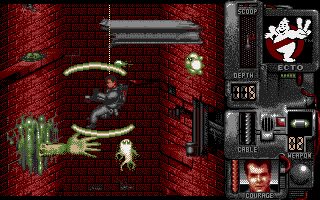 Ghostbusters II is an adaptation of the famous movie by Ivan Reitman, the sequel to the 1984 film Ghostbusters. The game was developed by Foursfield for several home computers, including ZX Spectrum, MSX, Commodore 64, Amstrad CPC, Atari ST, and Amiga, and published by Activision UK.

Unfortunately, the choice to develop the games for multiple platforms, including 8-bit computers, limited the developers in terms of features they could add to the game. In fact, the title includes only 3 scenes taken from the movie: inside the sewers, the Statue of Liberty walk to the Museum of Art, and finally, the battle against Vigo inside the museum. Great graphics on the Amiga version, but not so good gameplay. But if you are a fan of the movie, you cannot miss it.

Another game, called New Ghostbusters II for the NES, is probably a more successful attempt to transform this film into a videogame. We will publish it soon.